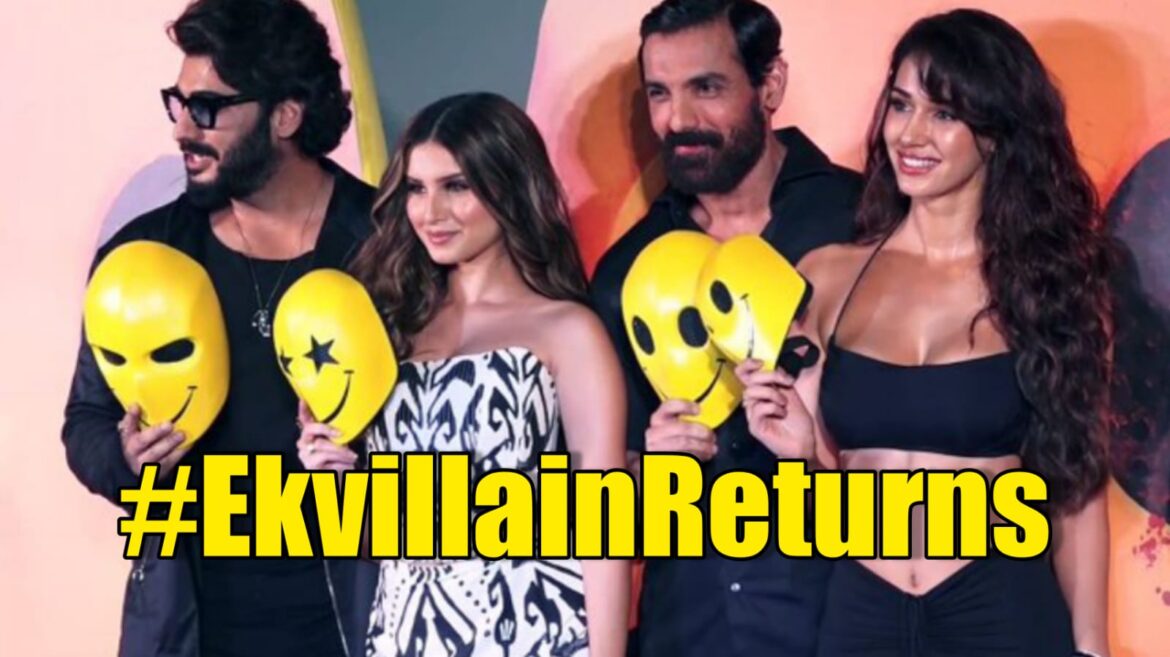 Arjun Kapoor, Disha Patani, Tara Sutaria and John Abraham At Trailer Launch Of Film Ek Villain Returns.
The complete star cast of ‘Ek Villain Returns’ was seen twinning in all-black outfits, matching the theme of the film.
Excluding actor Tara Sutaria, she opted for a black and white romper suit at the event, ditching the dress code. Is this any kind of a hint of her character in the film by the makers.

John Abraham posed in front of the shutterbugs with his co-actor Disha Patani. He was snapped in a casual all-black look, wearing a black shirt and matching jeans. Whereas, the ‘Radhe’ actor looked absolutely flawless in a black deep neckline knotted top with matching V-shaped pants.

Arjun Kapoor were all smiles in front of the paps. Arjun opted for an all-black look, matching the dress code. He was seen wearing a black thumbhole t-shirt, black jeans and a matching black jacket, he accessorized his look with black shades. The couple raised the temperature with their hot chemistry as they poses in front of the shutterbugs.

“Ek Villain Returns.” The first looks of Arjun Kapoor, Tara Sutaria, Disha Patani and John Abraham have fans excited.The trailer of Ek Villain Returns was launched and fans are going gaga over it.

Along with the star cast of the film, director Mohit Suri and producers Ekta Kapoor and Bhushan Kumar also attended the event and posed in front of all the paparazzi holding the yellow smiley mask from their upcoming thriller film. ‘Ek Villain Returns’ is all set to hit theatres on July 29, 2022.

Makers of the upcoming romantic thriller film ‘Ek villain Returns’ unveiled the trailer of their much-anticipated project in Mumbai. The complete star cast and the producers of the film were present at the grand trailer launch event. Check out how the celebs aced their look at the launch.

Jurgen Klopp on Salah,’I have no doubt Mo’s best years are still to come.'