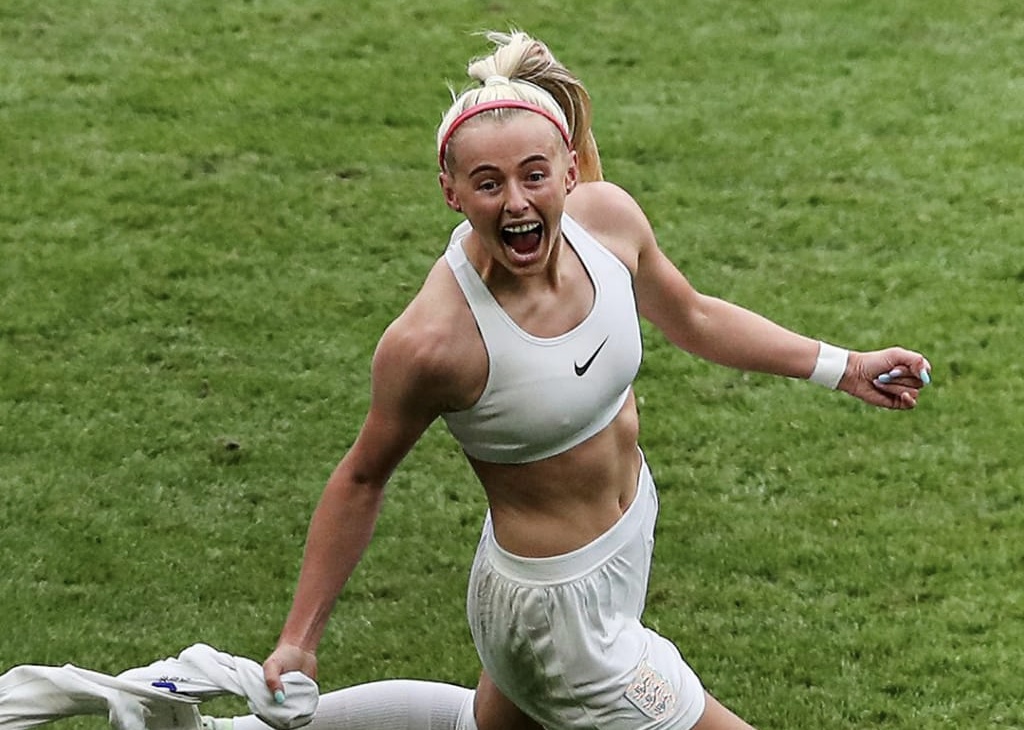 Hosts England sent a record 87,192 Wembley crowd into dreamland as they won their first major title by beating Germany in extra time.

Chloe Kelly was the unlikely hero as hosts England won a UEFA Women’s EURO for the first time, defeating eight-time champions Germany 2-1 after extra time in front of a record 87,192 crowd at Wembley.

🤯 𝙎𝘾𝙀𝙉𝙀𝙎! The moment @Chloe_Kelly98 scored the winner at Wembley ⚽️🎉

England have won their first major title, having lost both their previous Women’s EURO finals to Sweden in 1984 and Germany in 2009.

England are the fifth different winner after Germany (eight titles), Norway (two), Sweden (one) and Netherlands (one).

Wiegman is the first coach to lead two different teams to the title, and the first foreign coach to win a final.

England stuck with the same XI as in every game on their run to the final, but there was a blow for Germany in the warm-up when captain Alex Popp – who had scored in all five previous matches – picked up an injury, forcing Lea Schuller to step in.

The atmosphere was understandably frenzied in the packed Wembley stands early on, especially when Lauren Hemp’s cross was met by the head of Ellen White, though Merle Frohms was in the way.
The hosts were having slightly the better of the opening exchanges, forcing a succession of corners, but on 25 minutes Germany seemed set to take the lead from one of their own, only for Leah Williamson to scramble away Marina Hegering’s effort from point-blank range. White then raced on to a Beth Mead cutback, but her strike sailed just over.
Striker Tabea Wassmuth arrived for Germany at half-time and she quickly had a chance, pouncing on a loose ball on the left and cutting in before being denied by Mary Earps. Lina Magull also went close and Sarina Wiegman responded by introducing Alessia Russo, who had already notched a record four goals as a substitute in the finals, along with her similarly impactful Manchester United club-mate Ella Toone.

Within seven minutes, Toone struck. Mead was off the pitch injured, leaving England temporarily with ten players, but Keira Walsh’s incisive through ball from deep set Toone free and – one on one with Frohms – she held her nerve with a dinked finish. 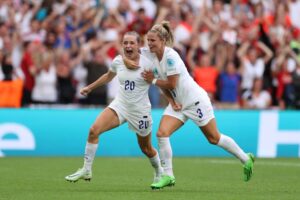 Germany responded and Magull smashed a shot onto the crossbar, Schuller hitting the rebound straight at a relieved, and grinning, Earps. Her relief was short lived, however, as Magull returned to beat Earps with 11 minutes left, a slick move culminating in Wassmuth providing the assist with a low centre, and the showpiece now destined for extra time. 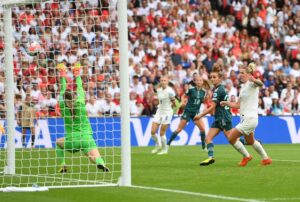 Martina Voss-Tecklenburg’s side called the tune for the first additional 15 minutes without seriously testing Earps, but England grew in stature once more and Frohms had to be alert to kick away Toone’s long-range effort as the final entered the second period of extra time.

Then came the moment England fans had dreamed of. Lucy Bronze helped Lauren Hemp’s corner into danger area and Kelly prodded in at the second attempt for her first international goal. Impeccable timing and a strike that Germany had no answer to as the hosts ran down the clock with ease to kick off the celebrations. 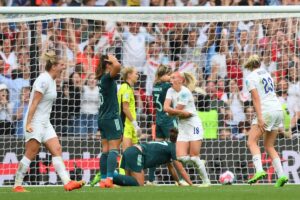 “Walsh balanced the team throughout the game. She was the continuous connection between the striker and the defenders. She hardly loses the ball and after winning it she finds the space to purposefully set up the possessional play forwards.”UEFA Technical Observer panel. 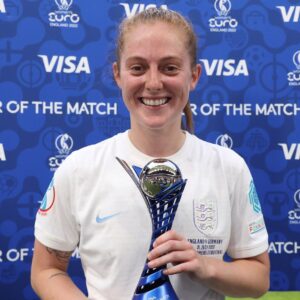 Germany goalkeeper Merle Frohms said , “It was just as tense and exciting as we were expecting. We knew that England were tough opponents but we also knew that we have beaten tough sides before, which gave us confidence. We weren’t able to bring it to the pitch today; maybe it was a little bit of nerves but, after six games, at some point your strength starts to run out a bit. We know that lots of people back home were watching on TV and hope that we have given them a desire to want to come to the stadium and follow women’s football – and that there are more fans in the stands at our league games.”

Germany coach Martina Voss-Tecklenburg said ,”We were close but England withstood the pressure. Congratulations to them. We are very sad that we lost. We’re in a process; it wasn’t quite enough, so we have to do a little bit more. We grow from games like this. Alexandra Popp would have triggered something against our opponents with her presence. But it just didn’t work out.”

England goalscorer Chloe Kelly said ,”It’s amazing. Thank you every single person that has come out to support us. This is what dreams are made of. Thank you to everyone who played a part in my rehab. I always believed I’d be here but to score the winner – wow. These girls are special and what a special group of staff.”

England coach Sarina Wiegman said,”What we’ve done is incredible. I knew we had England behind us – we saw that coming to the stadium. But the whole tournament we’ve had to much support from our fans. I’m so proud of the team.

“What we’ve done is incredible. I knew we had England behind us – we saw that coming to the stadium. But the whole tournament we’ve had to much support from our fans. I’m so proud of the team.”

Commonwealth Games 2022:Round up from day two in Birmingham

India loses to Australia in the finals...