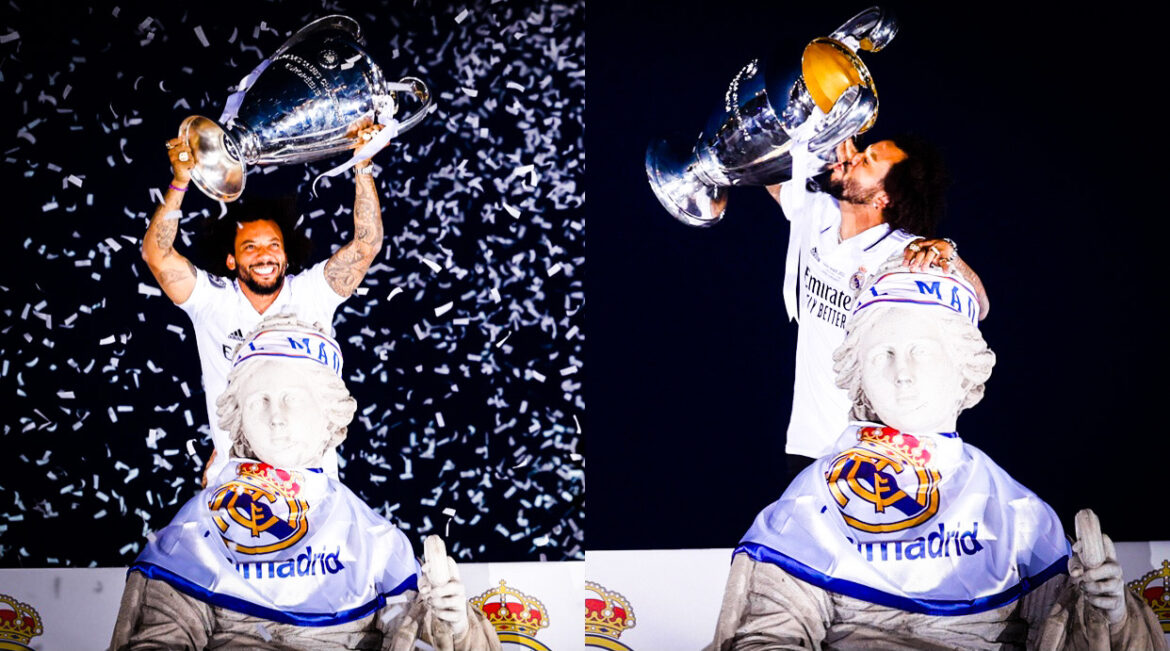 Real Madrid players and thousands of fans came together to celebrate the Champions League triumph secured in Paris.

The Real Madrid fans once again packed out the Plaza de Cibeles to celebrate another European Cup triumph. On the back of the team’s win over Liverpool in Paris, the player’s arrival at the fountain was one of the most eagerly anticipated moments and thousands of madridistas gathered to celebrate the club’s 14th European Cup crown alongside the players.

The champions arrived at Cibeles after having visited the city’s institutions. The party atmosphere in the square was added to by music as the fans showed their support for their heroes in this historic moment. Meanwhile, the stage opposite the façade of the city hall and the banners around the building featured the slogans that read: “¡Gracias madridistas!” and “Ch14mpions”.

The players got off the bus and took their places on the stage placed on the fountain, where they danced and sung along with the fans. The players thanked the supporters, who’ve played a vital role in the team’s 14th European Cup triumph. The crowning moment came when captain Marcelo put a Real Madrid scarf and flag on the statue of the goddess and held the Champions League trophy aloft from the top of the fountain as the Real Madrid fans revelled in yet another historic moment to celebrate the fact that the team are the European Cup’s most successful side.

The Santiago Bernabeu was the final stop in the celebration’s of the club’s 14th European Cup crown. The players and fans came together to celebrate another continental trophy triumph following on from the visits to the institutions and Cibeles. The players enjoyed another unforgettable moment as those inside a packed stadium savoured the moment with the European champions.

Carlo Ancelotti and Marcelo addressed the fans to thank them for their support: “Thanks for all of your support throughout the season. We’re madridistas, just like you”, commented the coach. Meanwhile, the captain explained: “This is a day of joy because we’ve won the best competition in the world. Marcelo was tossed up in the air by his teammates, the squad sung Hala Madrid y nada más, took a lap of honour and posed for photos with the club’s 14th European Cup to cap off another historic campaign for the best club in the world.