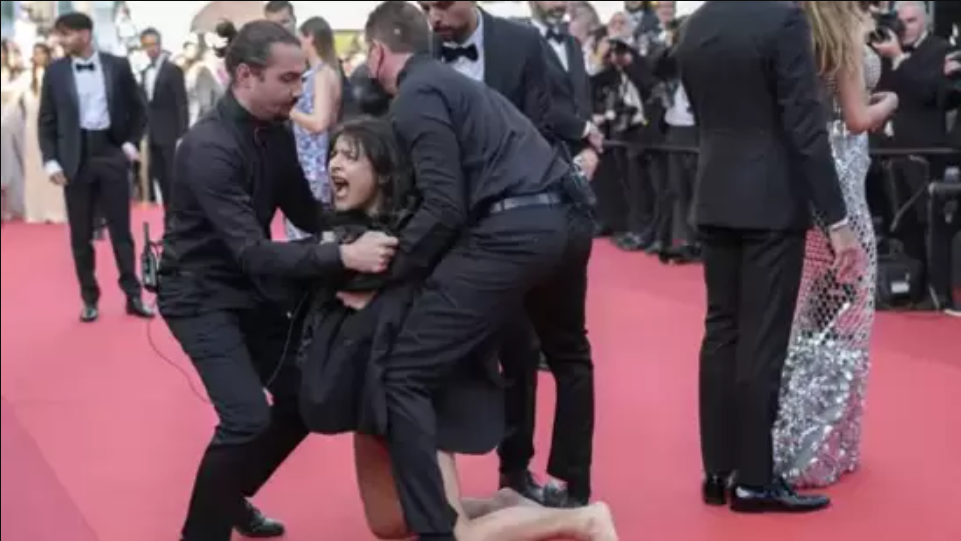 Several celebrities were surprised when a female protestor was taken from the Cannes Film Festival red carpet on Friday after she protested against sexual abuse against women in Ukraine. The woman was seen on film approaching the red carpet in a semi-naked state with paint over the bottom half of her body before being hauled off by security officials. Since May 17, the famous film festival has been taking place in southern France.

According to The Hollywood Reporter, eyewitnesses claimed that the woman pulled off all of her clothing and screamed in front of the collected photographers. Security personnel rushed over to her and wrapped a coat around her.

The demonstrator had painted the words “stop rapping us” over her chest and belly in the colours of the Ukrainian flag. The woman had blood-red paint on her lower back and legs, as well as the word’scum’ scrawled on her back. 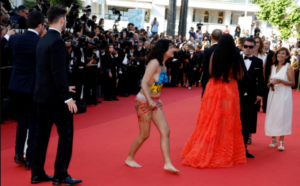 woman with her bare chest painted in the colors of the Ukrainian flag protests. Writing on her chest reads

The incident occurred during the premiere of George Miller’s Three Thousand Years Of Longing, which stars Idris Elba and Tilda Swinton and is directed by Miller. When the show aired, the director and stars were apparently there.

The Cannes Film Festival is one of the world’s most prominent film festivals, held every summer in Cannes, France. The festival features world premieres and screenings of some of the most well-known and highly acclaimed films. The top awards in the competition division are determined by an eight-member jury from the various films. Deepika Padukone is a member of the Cannes Film Festival jury this year for the 75th edition.

According to The Hollywood Reporter, there have been several complaints of Russian soldiers sexually assaulting Ukrainian people since the start of Russia’s military intervention in Ukraine earlier this year.

Earlier, Ukrainian President Volodymyr Zelenskyy had appeared at the opening ceremony of the festival through a live satellite video address. In an emotional speech, he called on the filmmakers to ‘confront dictators’.