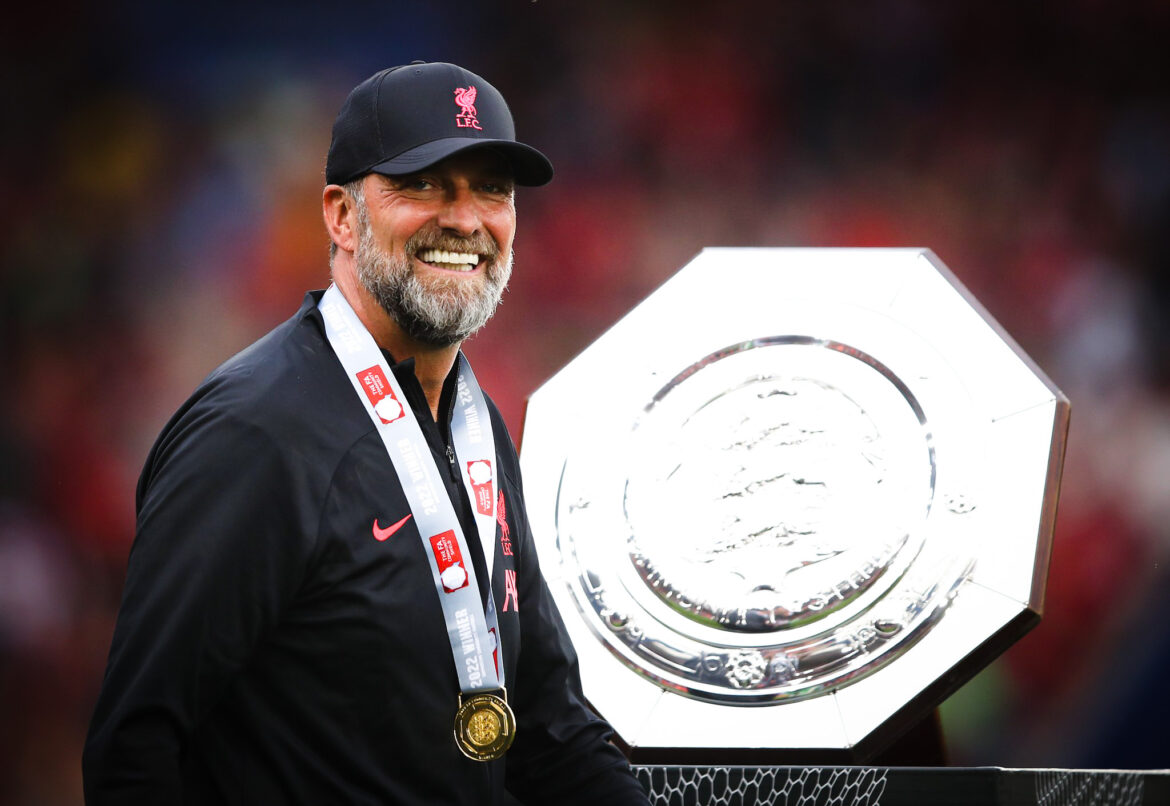 Two late goals handed Jurgen Klopp’s Liverpool their first trophy of the season as they defeated Manchester City 3-1 in the FA Community Shield at the King Power Stadium.

Liverpool were rewarded for a brighter start as Trent Alexander-Arnold’s deflected strike put the 2021-22 FA Cup winners a goal up at the break.

The Reds dealt the first blow of the new season to @ManCity, as they claimed a 3-1 win to seal victory in the 2022 #CommunityShield! 🥊 pic.twitter.com/1LZUe0Cvee

Premier League champions Manchester City hit back in the second half through Julian Alavarez before Mohammed Salah’s penalty and Darwin Nunez’s injury-time header sealed the silverware for Liverpool.

An immediate impact as @Darwinn99 introduces himself with a goal!pic.twitter.com/qLm9SN5sfO

Liverpool’s ’ win was sewn up in the fourth minute of added time as Nunez heading in his first goal for Liverpool before celebrating vociferously in front of his new adoring fans, a scene repeated at full time as Jurgen Klopp completed the domestic set with his first Community Shield as Liverpool coach.

This @LFC fan got Jurgen Klopp to sign his leg so that he could get it tattooed permanently 😅#CommunityShield pic.twitter.com/gQRI7JQHcM

Jurgen Klopp was pleased by Liverpool’s competitive levels after his squad claimed the FA Community Shield on Saturday evening, he said on Nunez’s impact,”It was good, it was really good. It is clear it will get better with time. We live in a world where everybody gets judged on first sight and that’s not helpful for nobody, but it happens constantly. We were today – both teams – not at 100 per cent of their physical, usual situation, if you want. But in the first few games [of pre-season] we were not even close to the fitness level of today. Then when he came on, we passed each ball for him to chase it and after the third ball he was completely killed and then everybody judged his first touches and these kind of things. It’s just a joke, but we have to live with that, he will deal with it brilliantly, we are patient, and we know he can do good stuff. I liked his impact today; I liked the impact.

Probably one of the highlights of the game, as good as we were, was the impact from the bench – [it] was really exceptional. Everybody who came on was immediately in the game – very, very, very helpful. A top sign. It was a good game, a good start from us, then City took over [for a] while, which cost us really because we really had to run a lot. Then we could come back into the game; we had then possession and City had to run a lot and then we could finish the game with nice goals. I think it was a good watch, the whole game. Both teams used what was available today; that’s what we could have expected and that’s what happened.”

Jurgen Klopp on his first Community Shield as Liverpool coach,he said,”Everything, I liked the whole game. We are that early [in the season], I like the problems we have in a game, especially when you win. I really like the problems because you have to work on that. I know we have to work. We said it before, we have to extend our pre-season at least for two more weeks. There’s no other chance. We cannot just now go in the normal rhythm, play games at the weekend that we are not prepared for. Then three games a week which we will have from, I don’t know exactly, from three or four weeks. So, it was for me a really nice watch. It is the most difficult opponent you could get. They don’t get worse, or whatever, they just strengthen and improve and develop and you see the squad, the boys they could bring on.

It is very experienced [and] proven quality and we have space to improve the quality from the bench, but I’m really excited about it, [about] what is coming there. I love Harvey’s impact, [it] probably came a bit late, only because of set-pieces, we were not sure [with] how to deal with it… Millie is, I am not sure which level he can reach this year to be honest, it looks very promising with Millie. Curt [and] Naby… wow when Naby came on. It’s just good and the boys who were sitting out today are in good shape as well, so that was the impression of the pre-season, but then you need a game, a real game, to show how far you are and tonight we were absolutely OK.”

The #EmiratesFACup winners have now won the #CommunityShield 🙌

Pep Guardiola on Community Shield defeat to Liverpool :’Proud of my players’

Dominant Nadal rolls into the quarter-finals