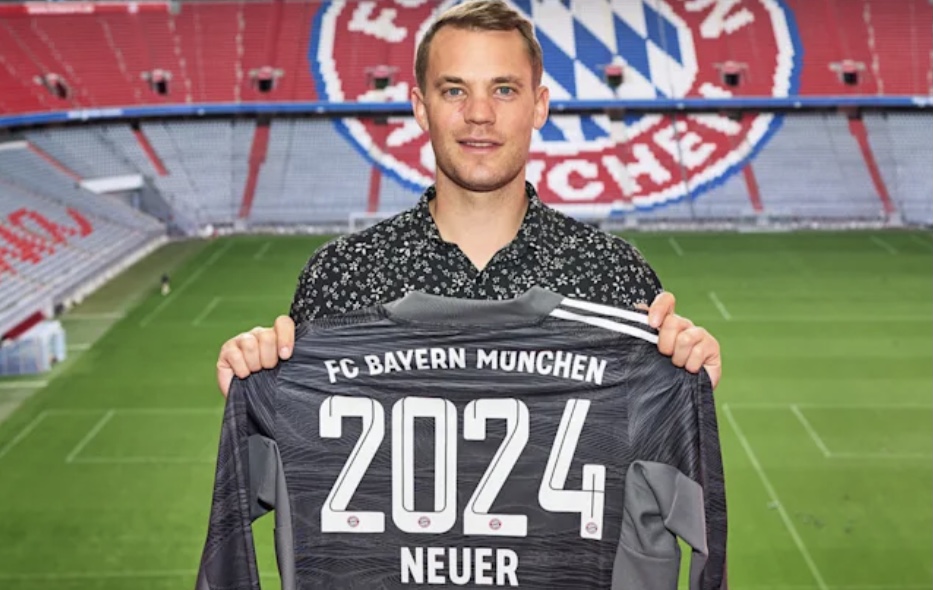 FC Bayern have extended Manuel Neuer’s contract by a further year till 30 June 2024. The Germany No.1 moved to Munich from Schalke in 2011. The 36-year-old has been FCB captain since 2017.

FC Bayern president Herbert Hainer said , “Manuel Neuer is a player whose place in FC Bayern history is already secure. We’re looking forward to the next years with the best goalkeeper in the world in our goal.”

FC Bayern CEO Oliver Kahn said ,”Manuel Neuer is the best goalkeeper in the world and has been setting the standard around the world for years. It’s a huge achievement to be so consistently world class for such a long time. We’re very happy to have extended his contract. Manuel is a defining figure in the history of FC Bayern.”

After singing the extended contract Manuel Neuer said,”I’m very pleased that my journey continues at FC Bayern. We’ll have a very good team again with which we can play for every title. As a goalkeeper, captain and leader, I want to be the support and a key factor in our big goals. We want to extend our title record and compete again for the DFB Cup and Champions League.”

Manuel Neuer has won 10 Bundesliga titles, five DFB Cups, six DFL Supercups, two Champions Leagues, the FIFA Club World Cup and the UEFA Super Cup at FC Bayern. He has made 472 competitive appearances for the club. The goalkeeper has 109 caps for Germany, which is a record in his position. He lifted the FIFA World Cup in Brazil in 2014, having come third in the tournament three years earlier. He has been rewarded for his amazing achievements with five IFFHS World’s Best Goalkeeper honours, and was the Best FIFA Men’s Goalkeeper and UEFA Goalkeeper of the Year in 2020. Neuer has been Germany’s Footballer of the Year in 2014 and 2011.