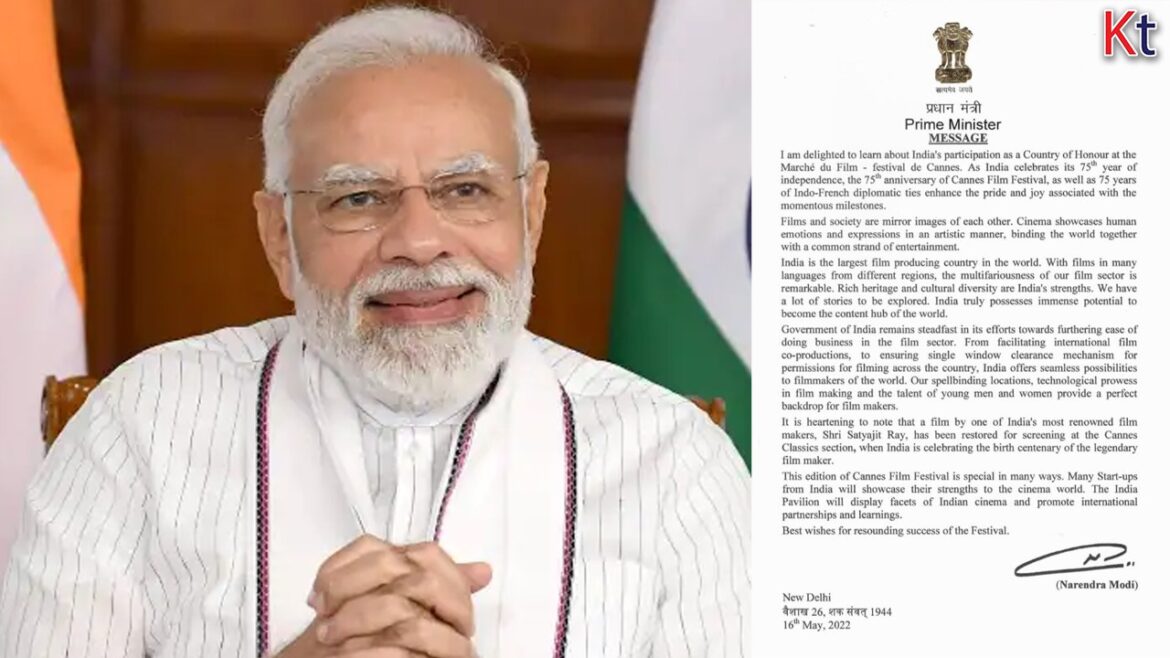 Prime Minister Narendra Modi has expressed happiness on India’s participation as ‘Country of Honour’ at the Cannes Film festival this year. In a message, the Prime Minister noted that India’s participation comes at the momentous meeting of celebration of 75 years of India’s Independence, 75th anniversary of Cannes Film Festival and 75 years of diplomatic relations between India and France. Positioning India as the largest film producing country in the world, the Prime Minister said that multifariousness of Indian film sector is remarkable and rich heritage and cultural diversity are its strengths. He said India has a lot of stories to be told and the country truly possesses immense potential to become the content hub of the world.

PM Modi reiterated India’s commitment to improve ease of doing business in the film sector. He said that from facilitating international film – coproduction to ensuring single window clearance mechanism for permissions for filming across the country, India offers seamless possibilities to filmmakers of the world.

The Prime Minister expressed happiness that a Satyajit Ray film has been restored for screening in the Cannes Classic Section as India celebrates the birth centenary of the maestro. One of the many firsts, startups from India will showcase their strengths to the cine-world. The Prime Minister expressed confidence that India pavilion will display facets of Indian cinema and promote international partnerships and learnings.

India will be the official Country of Honour at the upcoming Marche’ du Film, organized alongside the 75th edition of Cannes Film Festival, in France. The Country of Honour status ensures India’s presence as Focus Country at the Opening Night of Marche du Film being organised at the Majestic Beach with spotlight on India, its cinema, its culture and heritage.

India is also a “Country of Honour at the Cannes Next, under which 5 new startups would be given an opportunity to pitch to the Audio-Visual Industry. Ten professionals will participate on the Animation Day networking. As a major highlight of India’s participation at this edition of Cannes Film Festival, World Premier of the Movie “Rocketry” produced by R. Madhavan is scheduled to be showcased at the Palais des Festivals of the market screening on the 19thof this month.

The Indian delegation is being led by Union Minister Anurag Thakur and consists of film celebrities from across India.

NCB said no drugs were found on...