Had an excellent meeting with PM Kishida :PM Modi 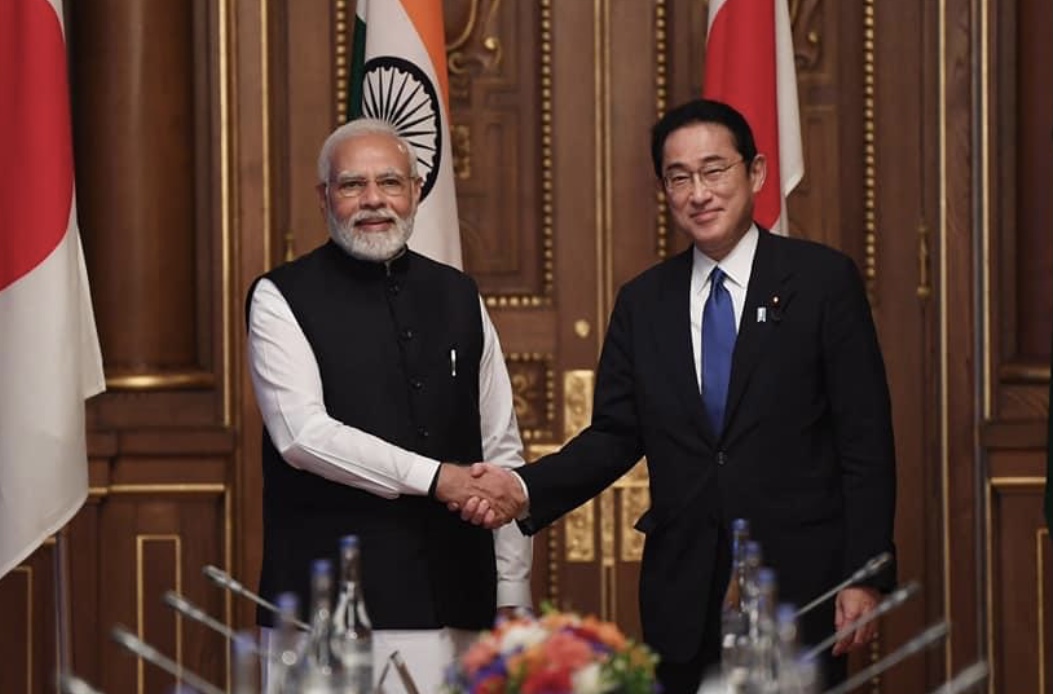 Agreed to work together to enhance cooperation in defence manufacturing, investment and trade, and P2P ties for mutual benefit.
Leaders reaffirmed their commitment to realize the shared vision of a free & open Indo-Pacific underpinned by inclusiveness & a rules-based order.

Prime Minister Narendra Modi held a bilateral meeting today with Fumio Kishida, Prime Minister of Japan. PM Kishida also hosted a dinner for PM Modi. They had productive exchange of views on enhancing bilateral relations in various spheres as well as on some regional and global issues.

2. The two leaders agreed to further enhance bilateral security and defence cooperation, including in the area of defence manufacturing. They concurred that the next 2+2 Foreign and Defence Ministerial Meeting may be held in Japan at the earliest.

3. The two leaders appreciated the growing economic ties between the two countries. They agreed that both sides should work jointly towards implementing their decision to have 5 trillion yen in public and private investment and financing from Japan to India in the next five years. Prime Minister highlighted the steps taken by Government of India to improve ease of doing business, logistics through Gati Shakti initiative and urged Prime Minister Kishida to support greater investments by Japanese companies in India. Such investments would help in creating resilient supply chains and would be mutually beneficial. In this context, Prime Minister Modi appreciated that Japanese companies were increasing their investments in India and that 24 Japanese companies had successfully applied under the various PLI schemes.

4. The two leaders noted the progress in implementation of Mumbai-Ahmedabad High Speed Rail (MAHSR) project and welcomed the signing of exchange of notes of the 3rd tranche loan for this project. The two leaders highlighted the increasing importance of information and communication technologies and in this regard agreed to encourage greater collaboration between private sectors of two sides in development of next generation communication technologies. They also discussed possibilities of collaboration in critical and emerging technologies such as 5G, Beyond 5G and semiconductors. The two Prime Ministers also agreed to deepen cooperation in the area of Clean Energy including green hydrogen and, in this regard, encouraged more business to business collaboration.

5. The two leaders agreed to further boost people-to-people linkages. Prime Minister Kishida noted that such linkages should become the backbone of bilateral relations. In this regard, they took note of the progress in implementation of the Specified Skilled Workers (SSW) programme and agreed to further scale up this programme. Prime Minister Modi raised the issue of further easing of travel restrictions in order to facilitate quarantine free entry into Japan for travellers from India carrying Covaxin and Covishield vaccination certificates. The two leaders concurred that the India-Japan Act East Forum was useful in prioritising development of India’s North East Region, and looked forward to early implementation of various projects which were identified by the two sides during the Annual Summit.

6. The two leaders exchanged views on recent global and regional developments. They noted the convergences in their respective approaches to the Indo-Pacific and reaffirmed their commitment towards a free, open and inclusive Indo-Pacific region. In this context, they welcomed the progress in the Quad’s contemporary and constructive agenda such as vaccines, scholarships, critical technologies and infrastructure.

7. Prime Minister Modi thanked Prime Minister Kishida for the warmth and hospitality extended to him and members of his delegation during the visit. PM Kishida extended an invitation to PM Modi to visit Japan for the next Annual Bilateral Summit, which was accepted with pleasure.

After the with the Japanese PM Fumio Kishida ,PM said ,”Had an excellent meeting with PM @kishida230. This meeting gave us the opportunity to review the full range of relations between India and Japan. Our cooperation is rapidly rising and this augurs well for the people of our nations.

PM Narendra Modi emplanes for Delhi after attending a productive Quad Summit and having forged stronger partnerships with Australia, Japan, and USA.