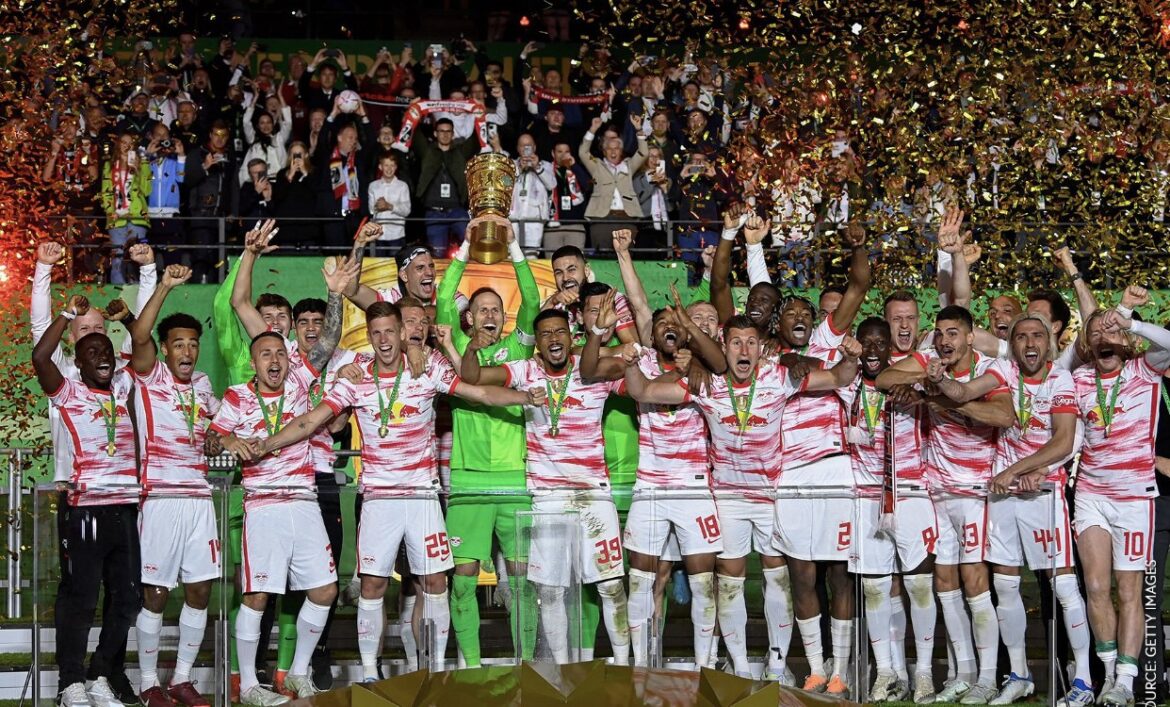 Two goals, a goal-line clearance, a red card and a penalty shootout – it was a gripping #DFBPokal final 😵

RB Leipzig overcame SC Freiburg 4-2 after a 1-1 draw. Maximilian Eggestein’s opener (19’) was equalised by Christopher Nkunku (76’)in the second half. The two sides were unable to be separated in extra time, but RB Leipzig came out on top in the penalty shoot out.

The 79th ever DFB-Pokal final was one of high intensity. Emil Forsberg and Christopher Nkunku came close to giving Domenico Tedesco’s team an early lead (15’). Freiburg were the more clinical side and took the lead with their first shot. Roland Sallai seemed to handle the ball accidentally and the ball fell into the path of Maximilian Eggestein, who finished from outside the area. Despite the questionable handball, the goal was awarded (19’). RBL looked for a quick response and Nkunku went close, but goalkeeper Mark Flekken and defender Nico Schlotterbeck combined to clear (24’). Willi Orban had the next effort, testing Flekken from outside the area (34’).

Leipzig began the second half with a lot of momentum, but Nkunku was denied again by Flekken in the 49th minute. With Leipzig in control, Freiburg hit on the counter with a long ball to Lucas Höler. He got the beating of Marcel Halstenberg and was brought down by the defender. As the last man, Halstenberg was shown the red card (57’). Vincenzo Grifo stepped up but couldn’t hit the target from the resulting free kick (59’). Leipzig seemed to step up a level after the red card and were finally rewarded for their resilience. At a free kick, goalkeeper Flekken was beaten to the ball by Orbán, and Christo was in the right place at the right time to turn home from close range (76’)! Towards the end of the game, Leipzig were the ones to come closest to winning through Dominik Szoboszlai (82’) and Dani Olmo (85’).

The game headed into extra time, where Ermedin Demirovic (92’) had the first chance to open the scoring with a header. Janik Haberer was also denied by a fantastic save from RBL goalkeeper and captain Péter Gulácsi, who deflected a strong effort onto the inside of the post. Demirovic got to the reboud but shot over the bar. Haberer came close again and hit a fantastic half-volley from distance onto the crossbar (115’). In the 117th minute, however, Freiburg were the lucky ones. Nicolas Höfler brought down Olmo in the penalty area and, despite what looked like a clear foul, the referee decided against awarding a penalty after a VAR check.

Penalties were required. With Leipzig finding the back of the net with all four of their efforts, Freiburg’s Günter (over) and Demirovic (crossbar) could not convert.

RB Leipzig coach Oliver Mintzlaff said ,”It’s crazy. We played with ten men for 60 minutes. We started the game badly and needed to show another side to ourselves in the second half. It’s amazing that everything came together in the end. This is our first major trophy.

It takes a little while for that to sink in. We have to stop and look at what we have achieved in the last 13 years and in the six years in the Bundesliga. It’s fantastic. We’re really going to celebrate this one! It is a historic evening for us”.